Many aspects of life in the Holy Land can generate toxic stress for children: the blare of missile alarm systems as rockets hurdle overhead, the pang of hunger in the stomach of a child growing up in poverty, or the sense of unease and fear on the street after a terror attack from a Jewish or Palestinian extremist.

These kinds of stressors, or adverse childhood experiences (ACEs), affect the day-to-day life of children and their long-term psychosocial development- and put peace farther out of reach.

ACEs cause much of the world’s burden of chronic disease, most mental illness, and are at the root of most violence. In Israel and Palestine, ACEs fuel perpetual cycles of violence and suffering. Anyone who is interested in a better, more peaceful future for Israelis and Palestinians must address the havoc ACEs wreak on their children.

So What Exactly is an ACE?

ACEs are adverse childhood experiences that are deeply harmful for three key reasons: they are traumatic, often chronic, and typically signal an unstable environment.

Research has established that:

The global health community began to view childhood adversity through the lens of the ACE framework after a groundbreaking U.S. study conducted in 1995 by the Centers for Disease Control and the Kaiser Permanente health care organization in California. In their study, researchers found a robust, persistent correlation between ACEs and a whole host of problems later in life.

The original CDC-Kaiser Permanente study measured ten ACEs that include physical and emotional abuse, physical and emotional neglect, sexual abuse, a parent who is addicted to alcohol or other drugs, who is depressed or mentally ill, a mother who is abused, an incarcerated family member, divorced or separated caregivers. More than 30 other ACEs have been added since the 1998 study include bullying, racism, community violence, and homelessness. 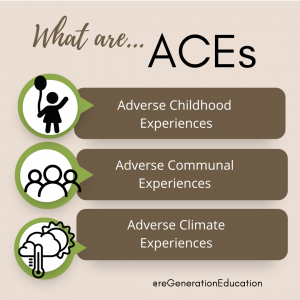 Children without economic stability, adequate housing, and education are burdened with the highest number of ACEs. And these most ACE-exposed families often have the fewest resources to mitigate their impact.

No one has administered the official ACE survey to children in the Holy Land. But the well-documented stressors of life in the Middle East undoubtedly qualify as ACEs. And exposure to these stressors significantly diminishes chances for peace.

Toxic Stress: How ACEs “Get Under the Skin”

When a child experiences a traumatic event, their bodies trigger a stress response — and, in the case of ACEs, this stress often turns toxic. This stress wraps around an ACE-exposed child like a moldy, wet blanket. Toxic stress:

The extent of the damage caused by toxic stress varies. But one thing determines how bad the damage will be: timing. Because most brain formation occurs during a child’s early years when the brain is most “plastic,” toxic stress in early childhood has the most unforgiving and long-term consequences. 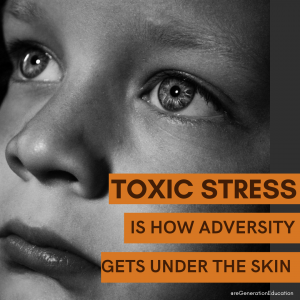 ACEs Are Not Destiny

Despite the bleak prognosis for healthy childhood development in atmospheres of persistent toxic stress, children experiencing significant ACE exposure are not irreparably damaged.

Over a child’s life, there are many opportunities to intervene and change the trajectory of their life. The brain is continually changing in response to the environment. If toxic stress stops and is replaced by practices that build resilience, the brain can slowly undo many of the stress-induced changes.

While the ideal approach to ACEs prevents the need for all levels of interventions, supporting relationships with a parent or teacher are particularly successful in buffering the effects of toxic stress and strengthening the building blocks of resilience.

If caregivers teach children that the adversity they experience is not their fault and show them different ways to cope, they can heal. That is why we always have reason to hope. Children’s capacity to heal can increase our collective prospects for peace and change the course of history.

But when there’s not sufficient intervention, some children respond to their childhood adversities through violence. Then we have failed. We have failed children and adults in the Holy Land killed by competing rocket fire, their families, their community, and the millions destined to live side by side on a small piece of land between the Dead Sea and the Mediterranean.