Over the International Day of Peace weekend, September 22-23rd, the ﬁrst Interfaith Council Workshop was held, jointly sponsored by reGeneration and  The Ojai Foundation’s Center for Council Practice. 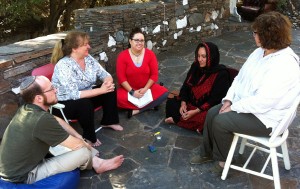 A dozen community members from across the religious spectrum committed to the two day-long training in an idyllic setting in the Santa Monica Mountains.

The workshop was co-facilitated, in an innovative move, by two highly skilled communicators each bringing unique and necessary components to the process. Itaf Awad, reGeneration’s Middle East liaison, co-led the workshop with Leon Berg. Awad, on part of her two-month U.S. tour from the Galilee, is a Council facilitator for staff and parents at Ein Bustan, the Jewish/Arab Waldorf kindergarten that reGeneration co-sponsors located outside the Jewish town of Tivon, in the Bedouin village of Hilf. Ein Bustan  was selected last year by the Sakhnin-Oranim Conference as one of the top ten outstanding peace projects in Israel. Leon Berg, a founding member of the Ojai Foundation, has taught Council in Israel and the West Bank since 2001.

The Way of Council is an ancient practice of group listening that draws from Native American traditions, but actually also has roots in Islamic, Judaic and Christian faiths. Essentially a community-building process, it is designed as a way for a group to discuss important and sometimes-difﬁcult topics.

Practiced by both children and adults, it is widely reputed as a respectful, meaningful and responsive method for communication. An atmosphere of honesty, courage and recognition is created when a group sits “in council”. Participants express themselves through a series of principles, called the Four Tenets: speaking from the heart, listening from the heart, being lean in speech and speaking spontaneously. Through this practice of Council, the circle’s collective knowledge quickly expands beyond the individual participants, thus creating a sense of community and shared experience. By establishing a space to express deeply, isolation and despair are reduced, introducing instead a sense of compassion and truth. It is an effective tool for reducing polarization, hostility and fear.

As Jack Zimmerman writes in his book, The Way of Council, “We listen in council with more than our ears…we listen without being inﬂuenced by long-held thoughts or associations – as a ﬁve year old would listen to a bedtime story. When we listen this way, and the person speaking is able to do so authentically, we can see his or her story unfolding in front of us. Witnessing the truth of the circle emerge from the cacophony of diverse views can be a remarkable experience.” Bringing the Way of Council in workshop form to reGeneration, was made possible by Shepha Schneirsohn Vainstein, LMFT, who envisioned applying the Way of Council to interfaith work in the United States no less than seven years prior when she encountered Council work, through the Listening Circles, in the Middle East. After participating in the workshop, it was clear to all present that it was an idea whose time had simply come.

The tools of Council are simple enough. They include talking pieces, which facilitators provide, and sitting in a circle around objects like a bowl of water or a few candles that are intended to focus and center the group. The beauty is in the balance, application and wisdom of the facilitators as they apply the principles of Council.

The workshop participants – whose faith backgrounds included Islam, Judaism, Christianity and Buddhism – learned basic Council methods such as how to listen and respond with respect and attentiveness. They were also challenged to explore their “shadow” selves, including areas such as personal prejudice and conﬂict. By articulating aspects of personal darkness to one another – the ones nobody wants to name and yet powerfully inﬂuence behavior – within the context and safety of the Council, workshop participants developed interpersonal bonds and authentic connection in a relatively quick and natural process. By the close of the weekend, the group was brimming with possibilities and ideas about how to expand the experience and bring the vision of Interfaith Council across local and global landscapes.

The process of the Way of the Council is effective for all ages. In this workshop it was used with adults, but it is proven as a wonderful community-building vehicle for children as well. Currently, the Way of Council is used by 12,000 children in 63 schools in Los Angeles alone. A school that has integrated Council into its curriculum and school meetings, is called “A Listening School”, because the skill of learning to listen and understand the other is integrated into the school culture.

reGeneration is proud to apply the Way of Council, particularly because it is a proven tool for interfaith community building. At Ein Bustan, the Jewish/Arab kindergraten where Itaf Awad facilitates, Council has made such a positive impact that the school is now on track for training to become one of the rare “Listening Schools” in Israel. This is both a groundbreaking and incredibly necessary step for the community.

reGeneration wishes to thank all the participants for their time and commitment in continuing to build bridges in the interfaith community locally. A very special appreciation is due to Itaf Awad and Leon Berg for bringing their incredible facilitation skills to bear in the Way of Council Workshop.

This program was inspired by the wonderful parents, faculty and youth at Ein Bustan, who must be recognized for their dedication to pioneering a more integrated and kinder school community in Israel.