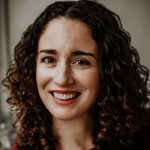 After a hi-tech public relations and marketing career, Thea is honored to be part of the movement to mitigate childhood toxic stress in crisis zones. Thea believes that trauma-informed early and primary education is key to securing a prosperous future for all residents of the Holy Land and is honored to tell their stories of resilience and transformation. Thea received her Bachelor of Arts in U.S. history from Tufts University and Master of Arts in journalism from Stanford University. She lives on her family’s seventh-generation family farm with her husband and twin daughters.

Thea can be reached at thea@regenerationeducation.org

Itaf Awad has led numerous women’s empowerment workshops in Israel, Palestine, Jordan, and Europe. In addition to fulfilling the role of reGeneration’s Middle East liaison, Itaf is a staff member of Creativity for Peace in New Mexico and is one of the founders of the Maagal Hakshava NGO promoting the Way of Council as taught by California’s Ojai Foundation. Itaf has facilitated the Way of Council with the Sulha Peace Project, Beyond Words, Academy of Central European Schools, and many other organizations in Israel, Palestine, and Europe. She also has studied Nonviolent Communication, Compassionate Listening, and the trauma recovery modality, Capacitar. Itaf is currently leading Council training at Ein Bustan, the Jewish/Arab kindergarten in Hilf co-sponsored by reGeneration.

Itaf served for 26 years as the city manager and advisor for women’s affairs at the Local Council of her native village, Dabburyiah, located in the north of the Galilee near Nazareth. In 2002 Itaf Awad received the prestigious Prime Minister’s Award “Nashim Portzot Derech, Women Leading the Way,” in recognition for her political and social contributions made on behalf of women in her region.

Rhonda, a native New Yorker has lived in Los Angeles for 22 years with her husband Mark and 2 children, Shane & Jenna. She has been a graphic designer for the past twenty years and has made many local businesses look like a million with her company “Help Me Rhonda.”  She has long believed that education is the door to freedom, offering a chance at a brighter future. That is why she is so happy to be part of the team at reGeneration.

Shepha co-founded re:Generation after a visit to educational communities in Israel and West Bank convinced her of the critical role that education plays in building interpersonal and intercultural bridges across divides of cynicism and despair. Ms. Vainstein received her Masters of Counseling Psychology from Pacifica Graduate Institute.  Before moving into private practice she trained and taught at the Valley Trauma Center in the San Fernando Valley from 1995 to 2000.  She is a psychotherapist practicing in Los Angeles specializing in trauma  recovery and personal empowerment. She is a facilitator of Nonviolent Communication and the Way of Council. A long time Waldorf parent and advocate, she continues to volunteer at her local public Waldorf-Method school, the Mariposa School of Global Education in Agoura Hills.

Adrienne was born in Baltimore and moved to California at age 12, where she was raised in the Bay Area. Upon completing her education she moved to Los Angeles where she started her career in the hospitality industry. She then started own Beverly Hills-headquartered hotel marketing and events production company, where she enjoyed producing major events for Fortune 500 companies worldwide. In 1989, she and her husband Lowell relocated to La Quinta where they opened a gallery in Palm Desert showcasing artists from the US, Mexico, Morocco, and Turkey. Adrienne enjoys meditation, spiritual development, and building community.

Shaare Zedek Hospital.  She worked with both Jewish and Arab professionals and patients and saw the urgent need for coexistence, peace, and communication. After returning to the United States she worked as a financial planner and served on the executive boards of the Valley Alliance Jewish Federation and Heschel West Day School.  Her involvement with reGeneration fulfills her life passion of building the foundation for peace in the Middle East.

Richard Novak is one of southern California’s leading criminal defense attorneys. He is a former Los Angeles Superior Court judicial officer and has represented defendants, witnesses and individuals under investigation by law enforcement and other government agencies for the past two decades. He has vast experience in federal and state criminal investigations, prosecutions and appeals. He is a meticulous strategist, a highly skilled negotiator, an aggressive trial lawyer and a nuanced appellate advocate. He also has a unique background representing parents and minors in juvenile dependency and delinquency cases in which law enforcement is investigating and prosecuting claims of child abuse and in which teenagers are accused of criminal conduct.

Richard is a lifelong resident of California. He attended U.C. Berkeley, where he obtained a bachelor’s degree with honors in economics. He attended UCLA Law School and was admitted to the State Bar of California in 1990. In 1990, Richard received a prestigious Skadden Fellowship that allowed him to establish a cutting-edge legal services program for homeless youth living on the streets of Los Angeles. He then served as a trial attorney and as lead appellate counsel for a law firm representing parents and minors in juvenile dependency proceedings. He then served as Deputy Federal Public Defender in the Central District of California. While working full-time as a federal public defender, Richard also served as an As-Needed Referee in the Los Angeles County Juvenile Court, presiding over juvenile dependency and delinquency proceedings. At the age of 40, Richard left the practice of law after being selected by the judges of the Los Angeles Superior Court to serve as a Superior Court Commissioner, where he presided over a wide range of criminal proceedings. Richard then returned to the practice of law and his private practice has been almost exclusively devoted to federal and state criminal defense, forfeiture matters and juvenile dependency and delinquency proceedings for the last decade.

For close to 15 of her 41 years in Los Angeles Unified School District, the second largest school district in the United States, Karen Sorensen worked as a violence prevention innovator focusing on the development of social-emotional learning (SEL) in children (K-12). She initially pioneered a model schoolwide implementation of SEL (the Second Step Violence Prevention Curriculum) at a local elementary school site where suspensions dropped approximately 66% after three years and referrals for fighting dropped approximately 95% after five years of implementation. Due to the success in violence and suspension reduction, at the request of the LAUSD Health Education Programs Coordinator, she further developed, coordinated and supported the model school-wide SEL implementation districtwide at 40 schools, K-12. Previously, Ms. Sorensen also worked as a school psychologist for 26 years. In her final years at LAUSD she worked as a Restorative Justice Adviser where she was responsible for supporting 80 schools and 10 Restorative Justice Teacher Advisers as part of the districtwide implementation of Restorative Justice practices, K-12.

Ms. Sorensen has extensive expertise in staff development in multiple areas including Second Step Violence Prevention Curriculum, School-Connect (high school level SEL program), Development of Empathy Skills, Defusing Disruptive Behavior, Bullying Prevention, Restorative Justice Practices, and many other psycho-social educational areas. She has also been a consultant for Chicago Public Schools in the implementation of Second Step. Until moving out of the area, she worked as an adjunct professor at Mount St. Mary’s University for nine years, teaching a graduate level course for teachers and administrators in creating a safe and healthy learning environment in schools. Additionally, Ms. Sorensen is a licensed marriage, family therapist and an educational psychologist. Having witnessed the successful transformation of children and schools, she passionately believes that beginning at an early age and continuing through high school, developing social-emotional skills in children can successfully help to build peaceful, productive, and harmonious communities worldwide.

Jihad Turk serves as Dean of Bayan Claremont, an Islamic graduate college designed to educate Muslim scholars and religious leaders.  He is also a founding Board Member of Claremont Lincoln University, a multireligious graduate school. Jihad has served as the Director of Religious Affairs at the Islamic Center of Southern California, the oldest and largest mosque in the Los Angeles area. Jihad actively engages in interfaith dialogue with Jewish and Christian communities and serves on the boards of several interfaith peace organizations. He was featured in a documentary about the Abrahamic faiths,“Traveling with Jihad”. With the Reverend Dr. Gwynne Guibord, Jihad founded and co‐chairs the Christian‐Muslim Consultative Group comprised of major Christian and Muslim denominations and organizations intent on intercultural understanding and attaining common goals.  Additionally, he was featured in the Los Angeles Times, and in films and documentaries on Islam and has appeared on CNN and the History Channel representing Islam. His current interests also include identity formation in the American-Muslim community, interfaith relations, Islamic reform movements, and community leadership and development with a focus on youth.

Muneer Waheed was born and raised in the Gaza strip area to a Christian Palestinian family. After finishing high school there, he moved to California to pursue a career in Computer Engineering. A 30 year veteran in Silicon Valley, Muneer had engineering and management roles with various companies from startups to Fortune 500. He has been involved in Waldorf education for over 20 years as a parent of two children who completed K through 12 at the Waldorf School of the Peninsula. Muneer participated in a variety of volunteer opportunities including a service project trip with Bay Area high school students to Tamarat El Zeitoun in Shefa-‘Amr in the Galilee. These were foundational experiences that informed his belief in the role of Waldorf education in addressing the needs of future generations everywhere — and particularly in trauma-impacted areas. Muneer is delighted to serve as the reGeneration Education Liaison to the Shared Society Arab Waldorf Leaders Task Force. Muneer can be reached at Muneer@regenerationeducation.org.

Noor-Malika Chishti has been involved with interfaith for over 20 years. Her Sufi training, beginning in 1972 in The Inayati Order, introduced her to the diverse ways in which people approach spiritual practice and laid the foundation for her work since the Inayati Order has an interfaith approach to spiritual practice. Almost 20 years ago she converted to Islam when she began exploring the Islamic roots of Sufism. Noor-Malika is also a Founding member of The Southern California Muslim-Jewish Forum. She was a Founding member and is Vice Chair Emeritus of the Southern California Committee for the Parliament of World Religions (SCCPW). She has been a member of the West Los Angeles Cousins group for 14 years, where Jewish and Muslim women meet for dialog and service. At the 2009 Parliament of World Religions held in Melbourne, Australia, Noor-Malika presented in three workshops: “Listening with a Heart of Mercy,” “Listening to the Other: Building a House of Prayer for Christians, Jews, and Muslims,” and “Spiritual Intimacy: Taking Interfaith Engagement to the Next Level.” Noor-Malika also was on a panel and workshop at the “Globalization for the Common Good” conference held in 2010 at California Lutheran University, also on the theme of spiritual intimacy in interfaith engagement. In 2008 Noor-Malika Founded Musallah Tauhid, Sufi-Muslims sharing sacred space with a Jewish and a Christian congregation. Her professional background was in the non-profit sector before she retired.